Hi! It’s me, Ivie! I haven’t been posting lately, and couldn’t think of anything to post, and haven’t been through any of my poems, so I’m recycling a post from my first blog. I decided that since it’s a new year, I’ll start it with a list! Here we go!

It’s happened to us anime fans before. There is someone who doesn’t like anime and we either know they would, or we really need to get the point across. Now we’ve all met them before, whether they’re our father, mother, girlfriend, wife, boyfriend, husband, twin, best friend, pen pal, whatever, there’s somebody that needs to be shown an anime. The two big reasons I’ve seen is one, that even though they say they don’t like it, deep down we just know they would and they need just the right thing to give it a try and there’s two, the person saying “it’s cartoons for a kid” or “isn’t it like that Bleach thing/Naruto stuff/weird tentacle crap”. And sometimes they just need to see a few episodes to get the point to them that not all anime is like Bleach. Now this is a list of anime that has benefited my friends and family who I showed it too, and it may help you, but keep in mind, it’s not a perfect guide. Here we go:

People will honestly try to tell you that this is the best anime to ever grace our eyes…well it’s not. It’s good, but it doesn’t make everything else look like child’s play. This anime will appeal to anyone who’s into the sci-fi and/or crime genre with some western and noir themes. It follows a group of bounty hunters on their adventures while focusing on Spike and his past. Very simple. It’s an older anime, but the older ones seem to hold a charm that the new ones can’t compete with. Why would I recommend this? Despite that it isn’t blow-your-mind amazing, it’s very good, well paced, tragic (in it’s own right) yet satisfying, and it doesn’t go so deep you need to watch it three times before finding out what’s going on.

A little bit of a deeper one, I’ll admit, but it’s worked for three people so far. Have someone who isn’t into all that magical, undead, unreal stuff. Here’s your stop. This one is a detective, psychological thriller without super weird things happening (cause we know anime can have it’s weird series, especially psychological). This series made my mom see anime in a totally different light on accident. My mom’s a huge fan of anything detective related, and at the time she saw anime as just cartoons. One day my mom came home just in time to watch an episode and she almost freaked because it was serious and nothing she’d let my younger brother watch. It follows the story of Dr. Tenma who was a successful brain surgeon who opted to save the life of a young child over the mayor of Dusseldorf. Fast forward nine years later, and he’s stuck chasing that same child he saved years ago after murdering one of his patients. It’s a pretty long one, but after a few episodes either your view of anime is changed or you need to see how it turns out.

Another older one, and a very long one. Think nothing at all like DragonBall Z but a little like DragonBall Z in the end. That’s what I told my cousin who was a DBZ fanatic and hated every other anime under the sun. It somehow worked. This is a fantasy with martial arts all over it. It starts with Yusuke who dies trying to save a kid. He becomes a detective for the underworld and solves cases about ghosts in the human world, then gets all martial arts and action-y with tournaments (see the nothing like DBZ but kind of like it yet)? I’ll probably never live that statement down, but it worked on my cousin…somehow. If martial arts and fighting is your thing (or that special person’s) look no farther.

Where would I be if I wasn’t pumping out some girl power anime? I don’t generally see this one as a top recommended anime for first time watchers, but I say why not? This is probably the most girl power you can get without it being Sailor Moon. So if someone’s into badass chicks this one’s worth a check. It centers around Mai Tokiha who has a HiME mark, which means she can control a spiritual mecha monster. She transfers to a school full of these HiMEs who as they start to learn and use their powers goes into different directions with them. It’s entertaining and even though it’s an action/fantasy anime it still has some romance and comedy in the drama. 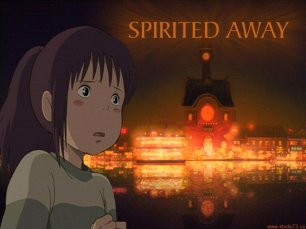 This whole list could be centered around Miyazaki movies. You can never go wrong with Miyazaki, believe me. I love this movie, and people could watch it just for the artwork alone. It’s a fantasy adventure movie, and even a coming of age movie in it’s own rights. It follows Chihiro a young girl who stumbles into a different world with her parents and has to save them and escape back to the human world. You get to see her transform and grow in this movie, that’s wonderful and beautiful, even though it’s for a young audience. Anyone could fall in love with this.

Any sports fans out there? Here’s one for you. Slam Dunk is about Hanamichi, a delinquent who isn’t so great with the girls. One girl who isn’t afraid of him, sees his potential for sports and talks him into joining a basketball team. He’s a natural athlete, and it follows his time playing basketball. It also has some romance and drama in it. Now honestly, I’m not a huge fan of sports anime but when I told a dude in school about it once, I decided I’d better watch it, too. And, even though I stopped for awhile, I’ve resumed and have a few episodes left. It’s very intriguing and likable, even to a non huge sports fan, like myself.

It’s a comedy, it’s a romance, it’s full of high school drama, it’s a fun adventure. Centering on a love triangle between delinquent Kenji Harima, the young lady, Tenma Tsukamoto, and her crush, Oji Karasuma, it follows the relationships of different people in a high school. It’s extremely funny, and has served as a gateway into anime for many of friends and maybe yours too! It’s able to center on the main characters, but not forget the little guys throughout the series. It’s great and hilarious without being bizarre.

Those are my main picks, and the most used to get people into anime or to change their opinion on it.

How about you? What anime has worked for you or someone you know?

4 Responses to Top Anime For The First Time Watcher

Talk to me baby! Cancel reply